Please note: We will be closed on Monday, December 26th, in observance of Christmas! What is an arthrotomy, or arthroscopy? “Arthro” means joint, and “otomy” means to cut. Hence, arthrotomy is when a surgeon cuts open a joint and looks inside with their naked eye.

Conversely, arthroscopy is when a small incision (about 3-5 mm) is made and a camera (scope) is inserted into the joint and the image is projected onto a screen (“arthro” means joint and “scopy” means using a scope). 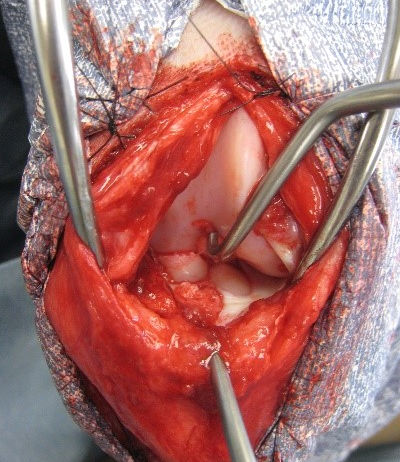 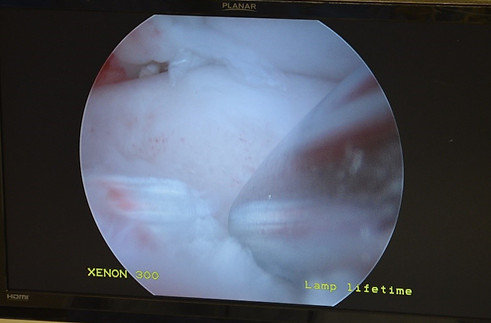 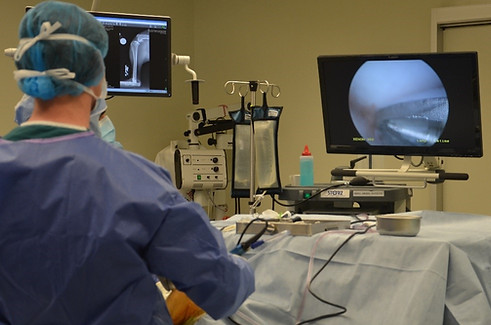 Which is better? In skilled hands, arthroscopy is superior. Let’s get into the details and see why.

Which provides a more thorough evaluation of the interior to the joint?

Arthroscopy. There is no real debate to this question. Numerous research studies in veterinary medicine demonstrate superior visualization with arthroscopic evaluation of the joint rather than arthrotomy. For example, studies consistently demonstrate that when you do an arthroscopy to evaluate the interior of the knee in a dog with a CCL rupture, arthroscopy provides better visualization, better evaluation of the lateral compartment of the knee, a higher rate of identifying concurrent meniscal damage, and results in a lower rate of “missed” meniscal tears that manifest as persistent limping after TPLO. These points are important in that one of the causes of persistent lameness following TPLO is a meniscal tear that was not identified, and therefore not treated, at the time of TPLO.

Which results in less pain, arthrotomy or arthroscopy?

Arthroscopy. In contrast to a large joint incision with arthrotomy (see picture to the left), arthroscopy only requires two 3-5mm incisions to allow for ports – one camera and one instrument. There is at least one study that showed that dogs who had arthroscopy plus stabilization of CCL rupture had less pain and better function than dogs that had arthrotomy plus stabilization of their knee.

Results of arthroscopic versus open arthrotomy for surgical management of cranial cruciate ligament deficiency in dogs.

Clinical relevance: “Clinical relevance: The results of this study suggest that short-term postoperative morbidity may be reduced in dogs receiving arthroscopic joint surgery with a limited approach for stifle stabilization as compared with a traditional open arthrotomy technique.”

There is also another study (meta-analysis) that shows that dogs with elbow dysplasia treated with arthroscopy recover more effectively than dogs with arthrotomy.

Comparison of three methods for the management of fragmented medial coronoid process in the dog. A systematic review and meta-analysis. R. Evans, W. Gordon-Evans, M. Conzemius. Published 2008. Medicine. Veterinary and comparative orthopaedics and traumatology : V.C.O.T.  Conclusions: “The results were that arthroscopy was superior to medial arthrotomy…”

Arthroscopy. Arthrotomy requires only a scalpel blade. Arthroscopy requires a capital investment of tens to hundreds of thousands of dollars depending upon the equipment manufacturer, and requires disposable equipment for the majority of procedures.

Arthroscopy. Arthroscopy provides superior documentation of the status of the joint and treatments through the acquisition of still pictures and videos. Such documentation is rarely performed with arthrotomy. In most cases, owners of dogs that have arthroscopy are presented with photos of their dog’s arthroscopy, similar to the standard of practice in human medicine.

Why does arthroscopy provide superior visualization?

There are two reasons arthroscopy provides superior visualization of a joint. First, the surgeon can place the tip of the arthroscope (ie the camera) in locations that one cannot place their naked eye, and therefore cannot see without an arthroscope. Second, the image with arthroscopy is greatly magnified on the screen, and this helps surgeons see better, and thus see meniscal tears and other joint damage better.

Arthrotomy. All surgeons can perform arthrotomies. Only a portion of surgeons are skilled arthroscopists. This is because the ability to perform arthroscopy is a skill that requires a substantial time and cost investment to develop.

Dr. Franklin has performed many thousands of arthroscopies over the last 10+ years, he is a Founding Fellow in Minimally Invasive Orthopedic Surgery, he has published numerous articles on arthroscopy, and he is co-editing a new textbook on veterinary arthroscopy. He believes strongly that arthroscopy is a more advanced level of care than arthrotomy, and the available data support that conclusion.